It is now a click away to see thousands of years of history from a church in Anatolia. As part of its effort to promote the unique Anatolian heritage in the world, the Turkey 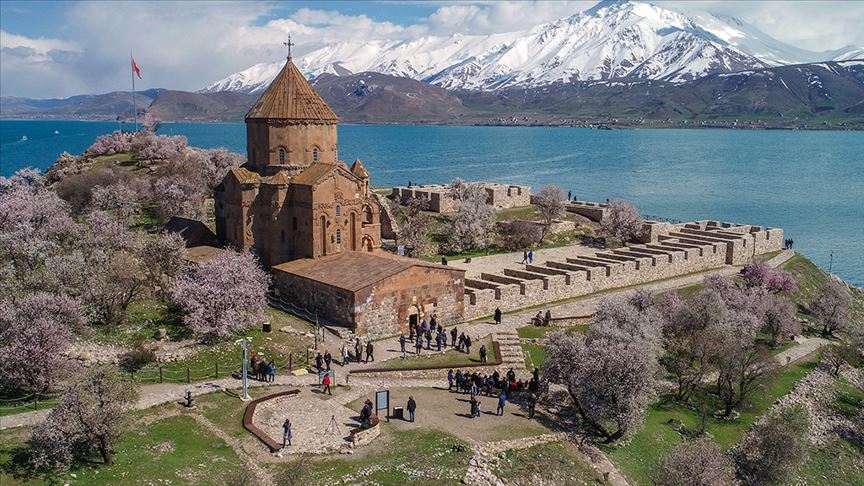 It is now a click away to see thousands of years of history from a church in Anatolia. As part of its effort to promote the unique Anatolian heritage in the world, the Turkish Presidency's Communications Directorate has prepared a website dedicated to the 1,100-year-old Akdamar Church, a medieval Armenian church in the eastern province of Turkey.

Located on Akdamar Island in Lake Van, the church was built between 915 AD and 921 AD by architect Bishop Manuel, under the supervision of Gagik I Artsruni, an Armenian king.

The website akdamarkilisesi.gov.tr, which provides comprehensive information and imagery in three different languages, Turkish, English and Armenian, is now open to visitors, some who cannot physically go to the island, or those who may be interested in seeing a masterpiece that has stood strong in their ancestral lands for centuries.

Efforts to bring together cultural and historical monuments and museums with visitors in a digital environment are increasingly important in the world and in Turkey.

Created as a result of painstaking work using technology, the website displays many natural and historical beauties to people who do not have a chance to see them physically.

VR videos and 360-degree photos taken using advanced image processing technologies give visitors the feeling of seeing the unique harmony of history and nature up close.

The church's reliefs and frescoes, the white flowers of the almond trees surrounding it, and the unique blue of Lake Van are some of the visual beauties that bring the divine atmosphere of this historic site to visitors. In addition, the unique character of Akdamar is presented to visitors through the lens of the famous photography artist İzzet Keribar.

Speaking of the project, Presidency communication director Fahrettin Altun said they have conducted several research and promotion activities to raise awareness about the rich cultural heritage that Turkey owns.

In this context, Altun stated that they realized the first project for Akdamar Church, which is an important center of faith for the Christian and Armenian people.

He said that thanks to the importance of the state and investment, both the island and the historic church became one of the most popular places in Turkish tourism.

Anatolia is a mosaic of different cultures and beliefs. The Armenian community is part of this mosaic. We will continue to strengthen the friendship bridge that we have built by living together for centuries and being an example to the world, ”Altun said.

Keribar's photos can be seen

As part of the project, the opening of an exhibition featuring the photos of Akdamar Church taken by Keribar on July 23 was taken by President Erdoğan at Hagia Irene Church in Topkapı Palace in Istanbul.

Speaking to Anadolu Agency, Keribar said that he had been taking photos and winning many awards for 65 years, and that the exhibition was one of the milestones of his professional life.
He said he took about 1,000 photos in four days. “One day I received a call from Istanbul. "You are in Akdamar, we wonder if you can take pictures before sunrise?" They said. We had to be there at 4:30 AM. We were there after dark and I took the pictures. Here you see 40-50 photos of about 1,000. ”

The exhibition will be open to visitors for the next 20 days. The website also shows the Akdamar photos of Keribar taken from 14 different spots.

Turkey Revealed 2023 Tourism Strategy Domestic tourism spending sees rise in Turkey. New Mercedes sprinters delivered to Hana Travel Turkey has potential over 75 mln tourists Hana Travel was listed of exporters TIM-500 Turkish MICE( Meeting-Incentive-Congress-Event) Antalya welcomed over 15 million tourists in 2019 Underwater beauty of Rumkale to open to visitors World's Oldest Temple to be Restored What attracts foreign tourists to Turkey
All rights reserved. The Hanatravel website uses cookies to store information on your personal computer. Some of the information plays an essential role in the operation of the site, while others help improve user experience. By using our site, you consent to the placement of these cookies. For more information, please read our Privacy Policy.