Underwater beauty of Rumkale to open to visitors

Rumkale, called the pearl of the River Euphrates, which hosted many civilizations in history, will open to visitors with an underwater project. 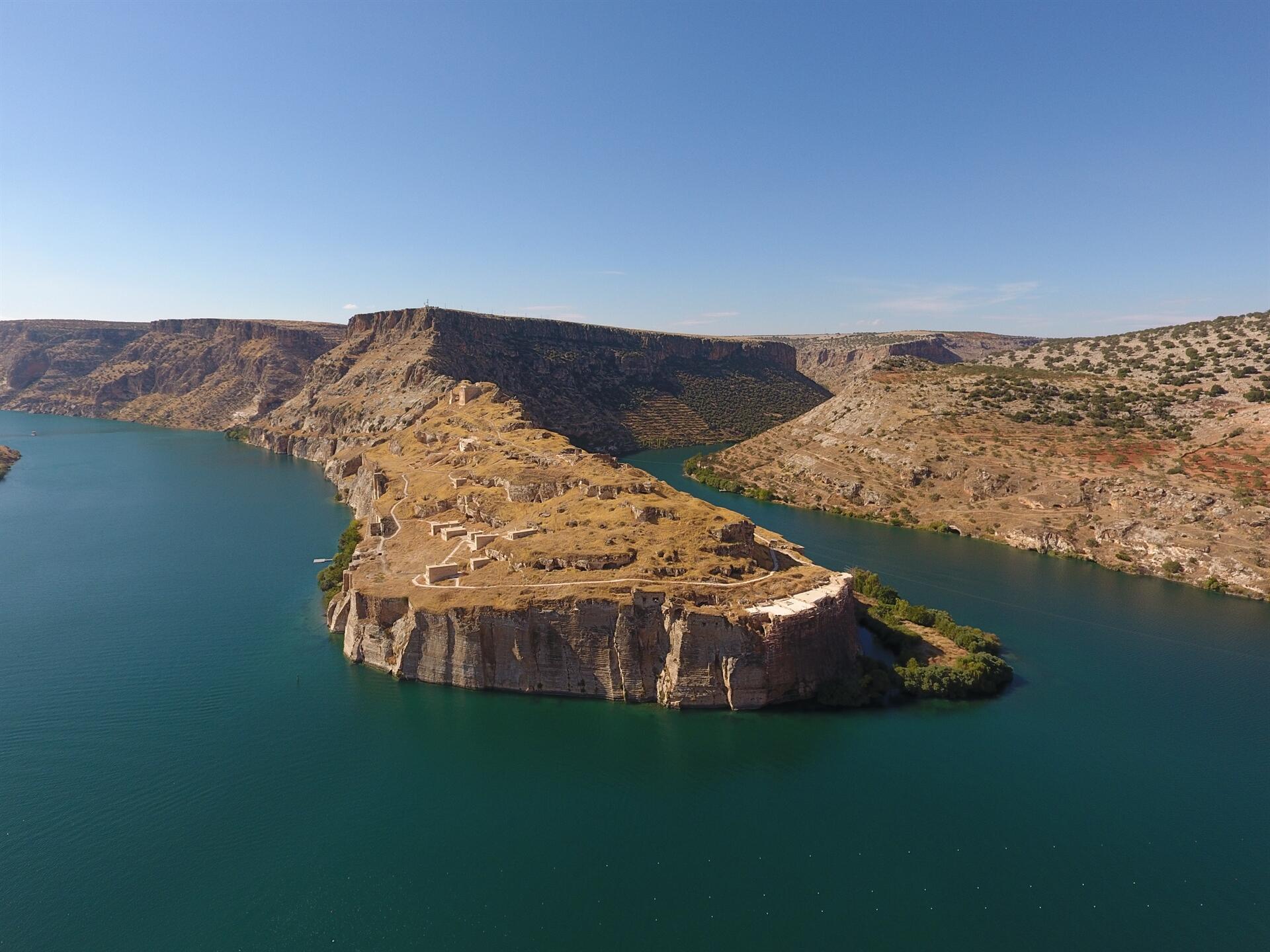 Underwater beauty of Rumkale to open to visitors

The Roman-era ruins on the edge of historic Rumkale, dubbed the pearl of the Euphrates River, which has housed many civilizations throughout history, will open to visitors with an underwater project.

Rumkale, home of the Urartu, Babylon, Sumerian, Seljuk, and Ottoman civilizations in the Yavuzeli district of the southeastern province of Gaziantep, is located in the region where Merzimen Stream meets the Euphrates River in a natural wonder surrounded by emerald lakes on three sides and steep, steep rocky hills surrounding it.
The castle and its surroundings are Rumkale's underwater beauty to open to visitors.
attract the attention of local and foreign tourists with its natural beauties along the Euphrates in the spring, as well as the historic buildings it has.

Rumkale, which is also considered sacred by Christians, is said to have been inhabited by one of the apostles of the prophet Jesus during the Roman period, and the Bible was copied in a carved room.

The Ministry of Culture and Tourism named Rumkale as one of Turkey's 13 most spectacular castles and works and continues to add the castle to Turkish tourism.

The metropolitan municipality of Gaziantep has previously created landscaping around Rumkale and is now preparing to open the Roman-era ruins underwater at the base of the castle.

Şahin said they took every opportunity to include the castle in tourism: "There is a castle in Rumkale as old as humanity and there is a life there. The inns, baths and houses built during the republic period have been restored. Then we made a beach package there. We organized the Rumkale water sports competition to promote this place and it was very successful. ”

Şahin said they would realize all projects in the near future to reveal the beauty of Rumkale and the Euphrates.

“Our current goal is to implement two projects that allow people to view the Euphrates and Rumkale from above. One is a funicular, the other is a terrace with glass views. The viewing terrace project is about to be completed. I hope we can complete our project next year. When people arrive there, they will see the unique beauty of the Euphrates while sipping the famous Menengiç coffee. ”

Şahin said there was also a great cultural treasure under Rumkale.

“Under Rumkale there is a great history from the Roman era. Our national diver Şahika Ercümen and Derya Can dived there. They said, "There is a wonderful history and a wonderful beauty there. We need to introduce it more. We are thinking of a project called the Underwater Archeology Institute. It will take us underwater through glass. We carry out our studies with the associated units. We took photos of places there with special underwater cameras and an exhibition was organized about it. There is a lot of work to be done underwater. We will show such a hidden paradise, the great treasure for the whole world, "said Şahin.

Domestic tourism spending sees rise in Turkey. Turkey Revealed 2023 Tourism Strategy Golf Holiday In Turkey Turkey has potential over 75 mln tourists Hana Travel was listed of exporters TIM-500 Turkish MICE( Meeting-Incentive-Congress-Event) Antalya welcomed over 15 million tourists in 2019 What attracts foreign tourists to Turkey World's Oldest Temple to be Restored New Mercedes sprinters delivered to Hana Travel
All rights reserved. The Hanatravel website uses cookies to store information on your personal computer. Some of the information plays an essential role in the operation of the site, while others help improve user experience. By using our site, you consent to the placement of these cookies. For more information, please read our Privacy Policy.