Drinking Raki is an art and Raki has its own culture in Turkey. 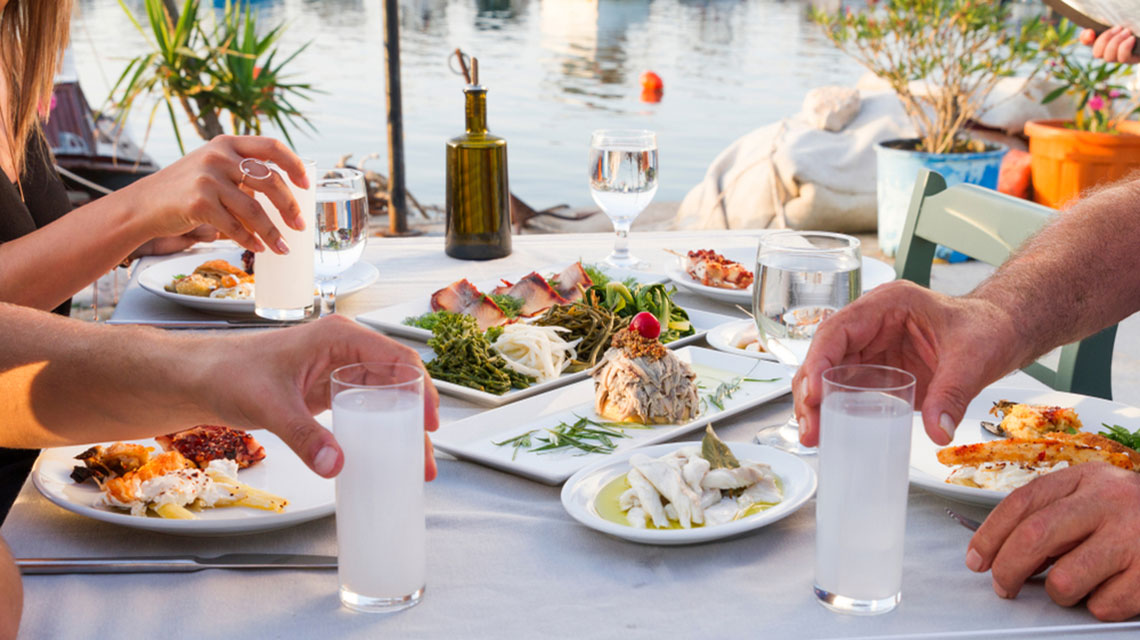 Alcohol has been consumed in Turkey for thousands of years, which may explain why the Turks have a more relaxed attitude towards consumption than people in some other Muslim countries. By the 17th century, there were 100 distilleries in Istanbul alone. Raki is the national drink of Turkey, where today more than 61 million liters are consumed annually - more than all other alcoholic drinks combined. It is an aniseed-flavored drink with close relatives in Palestine (arak) and Greece (ouzo). It is made from raisins normally distilled and the product is redistilled with anise.

It turns white when water is added (hence the nickname - lion's milk!). It is served in tall, slender glasses and about one part of it is mixed with two parts of water. It is often served with a separate glass of water, alternative sips are taken, and some argue that the level of the two glasses should remain the same. The idea is not to get drunk, but to relax, enjoy the company and keep a glow. To support this process, one is usually taken with food and in the company that leads to raki muhabbet (with affectionate and friendly conversation). Even if the main goal is a drinking session, food is often served.
The conversation does not have to be as milky as the drink itself, each participant should feel free to express their opinion, but the discussion is expected to be conducted with respect and compassion. Traditionally, the conversation is a male bonding activity, but more women are now drinking it, opening the bars and restaurants, as well as the conversation, to their different perspectives on life.

How to serve: Raki is always served with chilled water, although some fans say that ice reduces the taste of the drink.

Mezes: A minimum block of white cheese and honeydew melon is supplied or a full range of hot and cold meze (hors d'oeuvre) can be served. Mezes may vary depending on the region, but most are ordered at random or if you enjoy them at a family or best friends dinner outdoors; then order some extra mezes or the most favorite that the group likes.

Some rules for drinking Turkish Raki:
Since most of these rules (written by the master Aydin Boysan) are unique to Turkish culture itself, here are the most recommended rules for the first time you drink:
* Don't get drunk.
* It is drunk at and after sunset
Some also like to drink it during the day. However, don't try it in the hot summer.
* What is spoken at the table remains at the table. You cannot record or write it down.
* No photos at the table.
* No phone calls. When it rings, answer and say "I drink Raki" and turn it off.
* A slug language is ok, but swearing is not allowed.
* If someone drinks it too fast, you can tell them to slow down.
* No loud music. Just as soft as you can hear it.
* Don't cry at the table.
* No interruption. Listen and wait your turn.

The list goes on and on, you don't always have to follow all these rules, but it's just good to know it's a culture and you should be aware of and listen to the advice for a nice dinner.

Popular Cities to Visit Book airport transfer in Antalya Turkish Tea Culture What should for Stress-free Holiday? Antalya, Turkey: A city guide Places to visit in Antalya, Belek, Side, Kemer, Antalya, Lara, Kundu Transportation to Antalya Airport Private & Shuttle Transfer in Antalya, Belek, Lara Hotels Travel to Antalya What you should do in Side?
All rights reserved. The Hanatravel website uses cookies to store information on your personal computer. Some of the information plays an essential role in the operation of the site, while others help improve user experience. By using our site, you consent to the placement of these cookies. For more information, please read our Privacy Policy.