Kebab restaurants in Turkey have a regular range of kebabs, so name just a few that will quickly become your favorites! 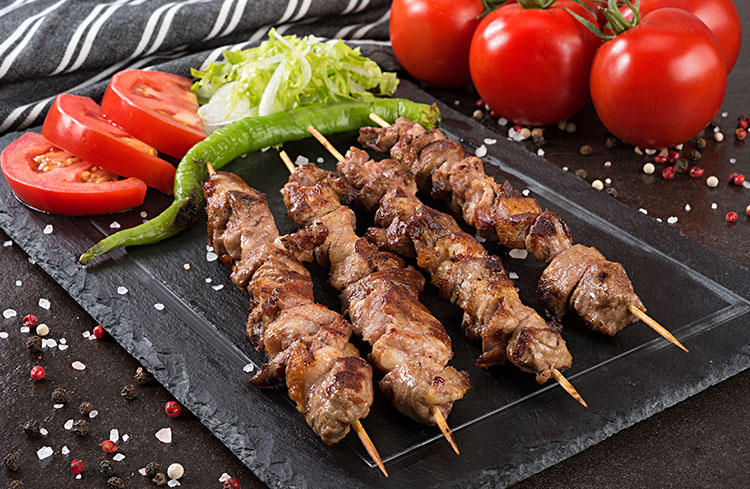 You can find kebabs in countries around the world, so what does kebab actually mean? Essentially, it's a way of putting together a number of types of meat dishes. Usually they are cooked on a skewer or on a spit. There are indications that the word itself comes from ancient Turkish languages ​​and originally meant 'roasted meat'. Kebab restaurants in Turkey have a regular range of kebabs, so name just a few that will quickly become your favorites!

Sis Kebab;
The most common variant of kebab is marinated lamb or beef, cooked on a skewer called "shish," or written in Turkish as sis. Sometimes vegetables are cooked with it, with typical vegetables being eggplant, tomato, bell pepper, onions, pickles and mushrooms.

Çöp Şiş Kebab;
This is very similar to the normal shish kebab. The difference is simply that the skewers are wood instead of iron, but the types of marinades, meats, and vegetables used are essentially the same. Çöp şiş usually contains smaller cuts of meat and less vegetables, hence the name, which translates to 'crap shish', although the taste is nothing to scoff at! The smaller cuts of meat are usually fat and then mashed with tomato and garlic before marinating in a set of spices. Since the cuts are small, they become crispier than other kebabs. They are also often used as snacks for a larger kebab meal.

Adana Kebab & Urfa Kebab;
On each menu, these are listed as two different types, but they are essentially the same except that Adana is a spicier version of the Urfa Kebab. Kebab dishes (and many other dishes) are believed to come from the best of southeastern Turkey, and Urfa and Adana are two of the signature southeastern cities in Turkey.

Both kebabs are a mixture of ground beef and / or lamb that is kneaded together with onion, garlic and local spices before being hand-packed on a shish. These spices are the main difference between Urfa and Adana kebabs, with Adana with red pepper flakes and urfa with paprika and other milder spices (like oregano and cumin) that still burst with flavor without being too hot. The dripping fat helps bind the meat together, so you see a hole through the center after cooking.

The kebabs are usually served with other grilled vegetables, but not on the same shish as the kebab.

Iskender Kebab;
Iskender is incredibly popular, especially in Istanbul and Bursa, where the kebab comes from. The name "Iskender" means Alexander in Turkish and is named after the alleged founder of the 19th century chef from Bursa who invented the Döner Kebab or rotating kebab.

Iskender Kebab is made by cutting pieces of doner kebab on pide bread that has been cut into small squares. It is then covered with better melted, a spiced tomato sauce and creamy yogurt is served next to it. Roasted peppers and tomatoes are often served with it. It is one of the more filling kebabs and is really delicious when all the flavors combine to perfection.

What should for Stress-free Holiday? Places to visit in Antalya, Belek, Side, Kemer, Antalya, Lara, Kundu Turkish Tea Culture What you should do in Side? Book airport transfer in Antalya Antalya, Turkey: A city guide Popular Cities to Visit Transportation to Antalya Airport Private & Shuttle Transfer in Antalya, Belek, Lara Hotels Travel to Antalya
All rights reserved. The Hanatravel website uses cookies to store information on your personal computer. Some of the information plays an essential role in the operation of the site, while others help improve user experience. By using our site, you consent to the placement of these cookies. For more information, please read our Privacy Policy.