The Ancient Centre of Arts and Culture, Bergama (Pergamon)

The most famous and magnificent city of the Asia minor, Bergama 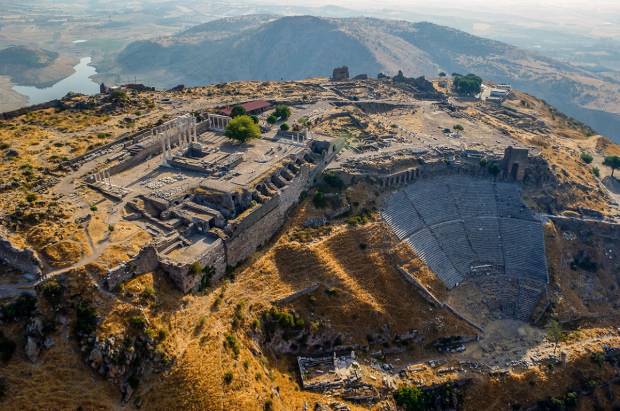 The Ancient Centre of Arts and Culture, Bergama (Pergamon)

Pergamon was listed as a UNESCO World Heritage Site in 2014 and it is one of the few settlements that survived several invasions and devastation over the centuries, but was recaptured due to its strategic location. As confirmed by the excavation findings, the prehistory of Pergamon dates back to the second millennium BC. The city survived the Persian rule and conquest of Alexander the Great. The most dazzling phase of its history lasted for nearly one hundred and fifty years, when it was the capital of the kingdom of Pergamon in the 3rd and 2nd centuries BC. At this time, one of the largest libraries in the world was built here and the city became a healing center. The arts also flourished and the city was best known for its beautiful sculptures. During the Roman period, Pergamon retained its significance and developed into "the most famous and beautiful city in Asia Minor" as described by the 1st century AD philosopher and author Pliny the Elder. When you visit Bergama you will have the chance to follow the stairs of the ancient city of Pergamon through several unique experiences.

The city of firsts;
Every year, nearly a million people visit Bergama and the ruins of the ancient city of Pergamon, which has witnessed many firsts in its history. One of the most important was the very first use of parchment. Invention of script has been a major breakthrough in the history of mankind, and parchment innovation was very important as it created a medium that allowed fast and stable scripts to be captured. The development of parchment enabled Pergamon to create a library of manuscripts that could rival Alexandria's world-famous library, paving the way to develop the city as an important center of art and science in the 2nd century BC . Pergamon had one of the first seven churches of early Christianity, and the name is quoted in the Bible. The first theater with a wooden stage; first union; first market law; first regulation for public buildings; first strike and collective labor agreement included firsts that took place in the history of Pergamon.

Open air museum;
The main ruins of ancient Pergamon, which contain all religious, social and commercial structures, are located in the acropolis and the most notable of these are the ruins of the Pergamon Library, which was one of the largest in the world at the time and a collection of 200 thousand manuscripts; the ten-thousand-seat theater where the audience enjoyed the beautiful view of the Pergamon Valley; the sanctuary of Athens and the temple of Dionysus; the shrine of Trajan; the Pergamon Gymnasium, which was one of the most important teaching institutions of the Hellenistic era; and the royal palaces of Pergamon. The base of the great altar of Pergamon, or the Zeus altar, was also seen on the Acropolis. The Sanctuary of Asclepius, one of the most important healing centers of ancient times, where the patients were treated with sound of water, mud baths and water from a healing spring. Pergamon was also home to physician Galen, father of pharmacology, making the city stand out in the history of medicine and pharmacology. The Serapis Temple dedicated to Egyptian gods was one of the most important structures from Roman times and was known as the Red Basilica because of the color of the bricks used. During the Byzantine era, this strikingly large structure was converted into a church, one of the first seven churches cited in the Bible.

Bergama Museum: gateway to ancient art;
Sculpture peaked in Pergamon in the 2nd century BC and sculptures made during that time are still admired even today. The Pergamon style became one of the most important sculpture schools, beautiful examples of which were on display at the Museum of Bergama. The most striking works are the statues of gods, goddesses and emperors, which have been excavated during the excavations in the area of ​​Pergamon. While the museum's most prominent exhibits are the sculptures, other artifacts from different eras can also be seen permanently.

Historic spas of kings and queens;
The thermal springs of Pergamon made the city one of the most important centers of healing and beauty in ancient times, and many of them reached our time. One of the main thermal baths of Pergamon is located in the Sanctuary of Asclepius (Güzellik Ilıcası), 4 km from Bergama.

For nature lovers;
In addition to its historical and cultural heritage, Bergama is also home to exceptional natural beauty. Trekking along the route to the Cossack Plateau through the pine forests that cover the Cossack Mountains between Bergama and Ayvalık, dotted with ruins and rural landscapes, also offers photo safari opportunities.

Turkish Tea Culture Book airport transfer in Antalya Travel to Antalya Transportation to Antalya Airport Popular Cities to Visit Private & Shuttle Transfer in Antalya, Belek, Lara Hotels Antalya, Turkey: A city guide Places to visit in Antalya, Belek, Side, Kemer, Antalya, Lara, Kundu What you should do in Side? What should for Stress-free Holiday?
All rights reserved. The Hanatravel website uses cookies to store information on your personal computer. Some of the information plays an essential role in the operation of the site, while others help improve user experience. By using our site, you consent to the placement of these cookies. For more information, please read our Privacy Policy.