Most Popular spices in Turkish cuisine

Not only do we get a wonderful aroma, these herbs are also super beneficial for our health. Here are the most popular herbs and spices you can taste in Turkish cuisine. 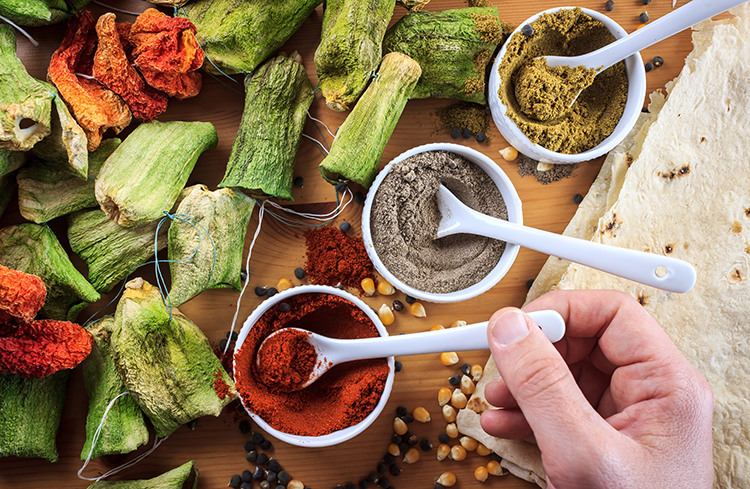 Most Popular spices in Turkish cuisine

Red pepper flakes;
One of the most popular spices that adds a wonderful aroma with a slightly bitter taste is red pepper flakes. They are made by drying hot and sweet fresh peppers in the sun before grinding them. Varying from region to region, some chili flakes are not roasted before being crushed. Used in all types of cooking, from soups to juicy hotpot dishes and stews to stir-fries.

Black pepper;
Widely used all over the world, black pepper adds flavor to any dish in Turkish cuisine. The most common use is in dry form and generally black granules are ground and used as a powder. The flavored and bitter taste of black pepper is used in both cooking and serving. Black pepper is known to aid digestion and fat burning due to its antioxidant effect. It is often consumed by people who have a cold because it boosts immunity.

Thyme;
Thyme, a plant that grows almost everywhere in Anatolia, is usually picked in the mountains. It is widely used in Turkish cuisine, dried or crumbled. Thyme, which has a sharp aroma, is especially preferred in meat dishes. Farmers who feed their cattle with thyme in Anatolia offer even the tastiest meat. Turkish thyme is not limited to food. Fresh tea, brewed in hot water, is often consumed as a tea. It also has antiseptic properties and offers a wide variety of benefits from high blood pressure, heart disease to digestive problems.

Mint;
With its intense essence and refreshing flavors, mint is a favorite spice used in salads, snacks, cold juices, stuffed vegetables (dolma) and yogurt dishes. Mint is also crazy for an upset stomach and helps the respiratory system.

Cumin;
The Intense aromatic flavor of cumin is an indispensable spice in Turkish cuisine and is widely used in the popular dishes of köfte (meatballs) and meat dishes. Turkish locals prefer powdered cumin and are almost never used in seed form. The intense aroma of cumin from Anatolia is mainly used to suppress the smell of meat. Cumin is also used to make spicy sausages, also known as sucuk.

Sumac;
Sumac is a spice known as sour and spicy as a lemon and is widely used in Turkish cuisine. Grown in southeastern Turkey, Sumac is collected from dwarf trees. The leaves are dried and ground into powder.

Bay leaf;
The bay leaf accompanies many delicious flavors in Turkish cuisine. They are collected and dried from the bay tree. Bay leaves, which change the flavor of the whole dish with its pleasant aroma, are not edible plants. It is a spice used only as a fragrance. It is generally used in tomato sauce and meat dishes made from fish, beef, poultry and game.

Cinnamon;
A pronounced sweet, aromatic spice used in Turkish cuisine from the Ottoman period. The smell and flavors are strong enough to change the whole style of the food. Cinnamon, which plays a role in Turkish cuisine in stick and powder form, is often used in the rice used for filling vegetables, lamb and chicken dishes. It is also an indispensable aroma in Turkish desserts. Cinnamon is added to drinks such as boza and salep, which are unique to Turkish cuisine. It is a source of polyphenol antioxidants, helps lower cholesterol, regulate blood pressure, increase body resistance and treat fungal infections. Cinnamon also has a weight loss function due to its effects on fat burning.

Rosmary;
Rosemary is obtained from the leaves of a Mediterranean dwarf tree. The leaf of this tree smells pleasant and is always green. It is widely used in Turkish cuisine. The small thin spiky leaves are used both fresh and dried. Due to its pleasant fragrance, the rosemary leaf oil is used in meals, herbal medicines and cosmetics. It is also consumed in fresh rosemary tea. It is used for making meat dishes and sauces. It also has many health benefits. Reduces stress and provides a relaxing effect. Rich in antioxidants, vitamins and minerals.

Clove;
The clove spice is obtained by drying the dark little spike-shaped buds of the clove flower and plays an integral role in Turkish cuisine. It is mainly used in sorbets and compotes with its intense flavor and dominant aroma. Cloves, which are also used in the production of cakes and desserts, are also included in herbal teas such as black tea, which is consumed by many Turks. They also freshen the breath. If you eat onions and garlic, many people in Turkey put one in their mouth afterwards to eliminate bad breath. Many restaurants offer cloves with the bill.

Antalya, Turkey: A city guide Turkish Tea Culture Travel to Antalya Places to visit in Antalya, Belek, Side, Kemer, Antalya, Lara, Kundu Popular Cities to Visit What you should do in Side? Book airport transfer in Antalya Transportation to Antalya Airport What should for Stress-free Holiday? Private & Shuttle Transfer in Antalya, Belek, Lara Hotels
All rights reserved. The Hanatravel website uses cookies to store information on your personal computer. Some of the information plays an essential role in the operation of the site, while others help improve user experience. By using our site, you consent to the placement of these cookies. For more information, please read our Privacy Policy.