From Troy to Gallipoli, Çanakkale

Canakkale is an honorable resting place for the soldiers who died in Gelibolu. 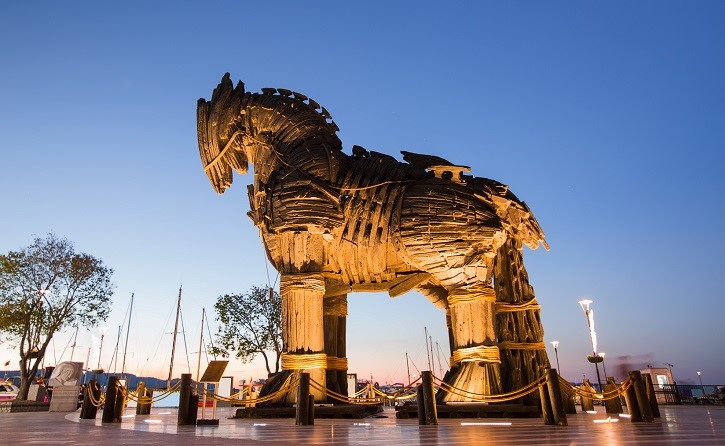 From Troy to Gallipoli, Çanakkale

The city of Çanakkale is located at the narrow entrance of 1200 meters from Çanakkale Street (Dardanelles) that connects the Sea of ​​Marmara and the Aegean Sea. Passenger and car ferries operate daily between Canakkale on the Asian side and Eceabat and Kilitbahir on the European side. Yachts sailing the strait stop at the well-equipped Canakkale Marina to allow tourists more time in the area. Hotels, restaurants, and cafes along the boardwalk provide visitors with a place to enjoy the harbor, overlooking Kilitbahir Fortress and Canakkale Archaeological Museum. In addition, the Troy Archaeological Site was added to the UNESCO World Heritage List, inviting history buffs to its beautiful ancient settlement ruins.

In 1451, Sultan Mehmet II, the conqueror of Istanbul, built one fortress on the European side of Çanakkale Street near Kilitbahir and one across the street at Çimenlik to control the passage of ships through the strait. Today, the Çimenlik Fortress serves as a military museum dedicated to the World War I battles of Çanakkale.

The historic national park of the Gelibolu Peninsula was created in honor of the 500,000 soldiers who lost their lives in Gelibolu, also known as Gallipoli. In 1915 Mustafa Kemal, the commander of the Turkish army, led a successful campaign to expel Allied powers from the area. The park is home to memorials, monuments and cemeteries, as well as the natural beauty of the Arıburnu cliffs and Tuz Gölü (salt lake). The beauty of the green hills, sandy beaches and blue waters are an honorable resting place for the soldiers who fought bravely and died in this historic battle.

The hills covered with greenery of pine and olive trees are dotted with sacred springs and monasteries. Regular ferries enable the trip from Çanakkale and Kabatepe, and in August, islanders and tourists alike gather for colorful local fairs.

Archaeological site of Troy;
Contrary to popular belief, the archaeological site of Troy does not include just one ancient city. In fact, this site includes the ruins of at least nine different settlements, which are built on top of each other and date back to the early Bronze Age. The first city was founded in the 3rd millennium BC and flourished as a trading city due to its location. This unique location allowed its residents to control the Dardanelles (today's Strait of Çanakkale), a waterway used by any merchant ship that crosses the Aegean Sea and is heading for the Black Sea. The extensive remains at this archaeological site are the main demonstration of the first contact between the civilizations of Anatolia and the Mediterranean world. Of course, Troy is extremely important to understand the early development of European civilization at such a critical stage.

Legends and Temples;
Homer immortalized Troy (Troy) in his stories of King Priam, Hector, Paris and the beautiful Helen. Archaeological excavations here have revealed nine separate settlements, including city wall ruins, house foundations, a temple and a theater. A large and symbolic wooden Trojan horse marks the legendary war of today. The old port of Alexandria-Troas was built in the 3rd century BC, and St. Paul passed the city twice during his third missionary trip to Assos. Wander around and see the moonlight scattered through the temple ruins! Or get up early to wake up over the acropolis! From the top you can enjoy the beautiful view of the Gulf of Edremit and appreciate this heavenly location. On the terraces that descend to the sea are agoras, a gym and a theater and from the north corner of the acropolis you can see a mosque, a bridge and a fortress. Downstairs is a small and idyllic old harbor. Assos has earned the reputation of being the center of the Turkish artistic community with its lively, friendly and bohemian atmosphere.

The legend revealed;
The city of Biga has given its name to an entire peninsula; it is a city with parks and a good place to see houses built in traditional style. The nearest beaches are Karabiga, Şahmelek and Kemer, where you will find reasonably priced accommodation.

Kaz Dağı (Mount Ida, 1774m) is located at the southern tip of Çanakkale and in the beautiful Kaz Dağı National Park with its beautiful landscapes, soothing green areas and various hot springs.

In Çanakkale you will find beautiful landscapes, historical places and relaxing green areas.

Travel to Antalya What should for Stress-free Holiday? Places to visit in Antalya, Belek, Side, Kemer, Antalya, Lara, Kundu Private & Shuttle Transfer in Antalya, Belek, Lara Hotels Book airport transfer in Antalya Popular Cities to Visit What you should do in Side? Transportation to Antalya Airport Antalya, Turkey: A city guide Turkish Tea Culture
All rights reserved. The Hanatravel website uses cookies to store information on your personal computer. Some of the information plays an essential role in the operation of the site, while others help improve user experience. By using our site, you consent to the placement of these cookies. For more information, please read our Privacy Policy.