A Wonder Of Nature, Pamukkale

A wonder of nature and a Roman city side by side; Pamukkale 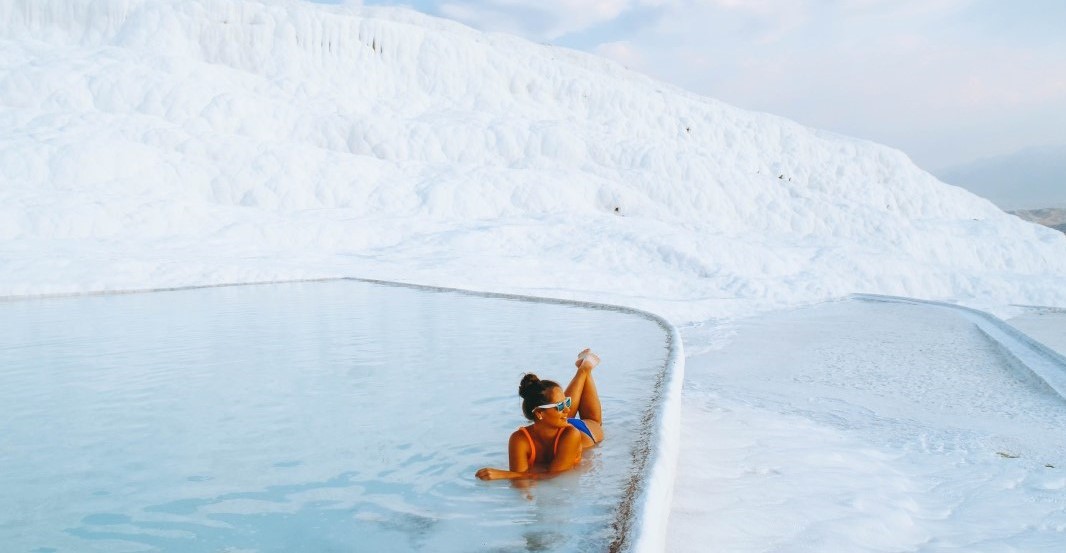 A Wonder Of Nature, Pamukkale

A wonder of nature and a Roman city side by side;
Pamukkale appears in almost every list of places you can see before you die and is visited by nearly two million tourists every year. Pamukkale is a place where nature took on the role of an artist and created such a majestic beauty. The white travertine cascades resembling frozen waterfalls and shallow pool terraces are created by the water from the thermal springs that react with the air. His allure was first noticed by the Romans. The beautiful ancient city of Hierapolis was founded near the travertine by the Romans. This unique travertine and the ancient ruins are inscribed on the UNESCO World Heritage List.

2,000-year-old center for beauty and health;
Pamukkale is said to enchant visitors at first sight. Under the spell of travertine, Pergamon Kingdom established the city of Hierapolis 2,000 years ago. At the time, Hierapolis served as a thermal health center, and visitors from different parts of Anatolia came to the city to receive a balneal treatment in search of health or beauty. In our time, those who seek beauty or health still dive into the thermal baths. You can also enjoy swimming in the timeless pools like your ancestors did, and enjoying the majestic sight of the travertine. However, the natural beauty that has emerged over thousands of years is so fragile. Therefore, only certain areas are open for paddling or dipping. Those seeking healing should arrange a longer stay in Pamukkale to enjoy balneal treatments, mud baths and massages at thermal spas around the ancient city and the travertine city.

Legendary temples;
The ancient city of Hierapolis has reached our time in a fairly well-preserved state. The most visited structure from ancient times should be the Roman Baht House, and currently the same building is used as the archaeological museum. Many artifacts have been excavated during the excavations at Hierapolis and other nearby ancient sites, and some statues and other items can be seen in the museum. The ancient theater, the temples, the monumental fountains, the necropolis, the agora and the gym are quite well preserved, so you can feel like traveling back in time 2000 years. You would find the story of Pluto's Gate (Plutonium), believed to be the gate of hell during the Roman era, very fascinating.

St. Philip Martyrium and grave;
Hierapolis is a sacred settlement in Christianity. Holiness is attributed to the fact that St. Philip, one of the twelve apostles of Jesus Christ, died a martyr in the city. Built in the 5th century by the palace architects, the Martyrium is a sacred pilgrimage site for Christians. The ruins of the cathedral date from the 6th century and contain the Baptistery and the Chapel of the Metropolitan Bishop. The 7th century church is known as the Church of the Columns (Direkli Kilise) is the other important structure from the Christian era. There are several other chapels scattered around the city. These structures prove that Hieropolis was an important religious center during the Eastern Roman Empire. That is why the archaeologists called it the holy city.

Unique sunset;
Pamukkale offers its visitors several unique experiences. Enjoying the beautiful view created by the sunset coloring the travertine in beautiful hues is an experience worth extending your visit.

Places to visit in Antalya, Belek, Side, Kemer, Antalya, Lara, Kundu Travel to Antalya Book airport transfer in Antalya Antalya, Turkey: A city guide Transportation to Antalya Airport Popular Cities to Visit Turkish Tea Culture What should for Stress-free Holiday? Private & Shuttle Transfer in Antalya, Belek, Lara Hotels What you should do in Side?
All rights reserved. The Hanatravel website uses cookies to store information on your personal computer. Some of the information plays an essential role in the operation of the site, while others help improve user experience. By using our site, you consent to the placement of these cookies. For more information, please read our Privacy Policy.